Tekashi 6ix9ine can’t even give away money … or at least not to No Kid Hungry.

On Tuesday the non-profit organization released a statement saying it was rejecting the rap star’s generous 200K donation. Yep you red that right. Apparently all money isn’t good money.

A spokeswoman for NKH said via a statement, “We are grateful for Mr. Hernandez’s generous offer to donate to No Kid Hungry, but we have informed his representatives that we have declined this donation.”

The reasoning wasn’t immediately made clear, but the message was to Tekashi who responded on Instagram saying, “@nokidhungry rather take food out the mouth of these innocent children i never seen something so cruel.”

After being released from prison early thanks to COVID-19, the rap star, real name Daniel Hernandez, seems to be trying to do something good. He initially made the announcement on Instagram saying:

“During this pandemic I understand we have nurses and frontline heroes who risk their life daily to save other. But never forget the children and families who depend on our public schools for daily meals…
To every influencer out their remember if you are blessed GOD gave you that blessing not just for you but also to help others.”

#tekashi69 donates $200k to the kids affected by the coronavirus

Despite being locked up for 13 months the 24-year-old is still raking in the dough. Last week he went on Instagram Live to boast about his millions, jewelry and popularity with fans. The latter was made even more apparent when shattered Instagram Live records with over 2 million viewers.

According to TMZ he reportedly made around $2 million from the release of  his new single “Gooba” and accompanying merchandise in less than a week and wanted donate 10 percent to charity.

Well we know one person who will take Tekashi’s donation? His baby mama. Sara Molina the mother of his four-year-old daughter recently blasted him on Instagram for failing to take care of her and their child as promised. In the lengthy post she claims he has neglected his daughter Saraiyah, and does not support her in any way. 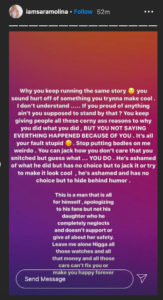 Season 2 of Love and Marriage: Huntsville may have come to a screeching halt thanks to COVID-19, but the drama is...