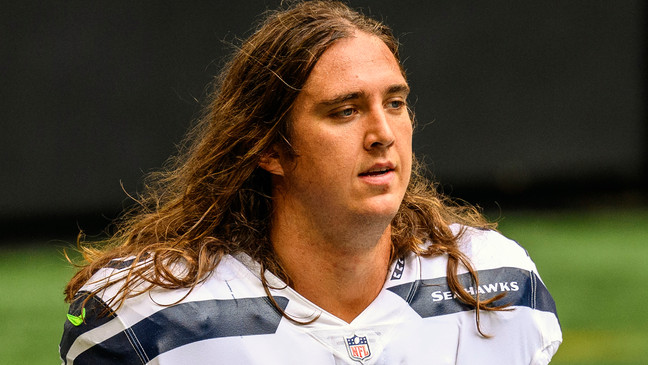 Despite police busting in during the domestic dispute and finding the gruesome aftermath, Wheeler appeared in court on Monday and shocked everyone by pleading not guilty. He is now free on $400,000 bail.

His plea comes after he went on Twitter and apologized to his girlfriend and her family for the pain he caused. “Events happened over the weekend that transpired from a manic episode. I am deeply sorry for the pain and suffering that I have caused to Alleah and her family.”

It is time for me to walk away from football and get the help I need to never again pose a threat to another. I cannot express my sorrow or remorse enough. I am truly ashamed.

According to the police report obtained by KOMO News, the victim is a black woman. Photos revealing her identity and injuries have been circulating on social media but we cannot confirm if the woman seen is actually the victim.

It’s reported Chad got upset his girlfriend wouldn’t BOW DOWN to him and he went into a rage and began choking her until she lost consciousness. The drama unfolded Jan. 22 when officers were dispatched to a report of a domestic dispute at her apartment in Kent, Washington.

When officers arrived, they heard a woman screaming and had to force their way inside the apartment. They then broke down the door to the locked bathroom, where they found Wheeler with his girlfriend. She was crying in pain, her face was covered in blood and her arm was hanging limply at her side, court records say.

According to the police report, cops say Wheeler was not cooperative. It took 3 police officers to detain the massive NFL lineman. They used a taser in an effort to detain him, but it had “little to no effect.”

The 27-year-old blamed his actions on a “manic episode” and said he was stepping away from football to get the help he needs. The Seahawks organization has also released him from the team. He was placed on electronic home detention until his next court date on February 11.

Related Topics:Chad Wheeler
Up Next