A billi, A billi … Congratulations are in order for Tyler Perry! The media mogul is now the latest addition to the billionaire club!

This one isn’t necessarily a shocker, but it is a testament to the fact that where you are in life doesn’t have to be where you’ll stay. In an article titled, “From ‘Poor As Hell’ To Billionaire: How Tyler Perry Changed Show Business Forever,” Forbes details TP’s massive fortune.

“The 51-year-old entertainer owns the entirety of his creative output, including more than 1,200 episodes of television, 22 feature films and at least two dozen stage plays, as well as a 330-acre studio lot at the edge of Atlanta’s southern limits. He used that control to leverage a deal with ViacomCBS that pays him $150 million a year for new content and gives him an equity stake in BET+, the streaming service it debuted last September. Forbes estimates Perry has earned more than $1.4 billion in pretax income since 2005, which he used to buy homes in Atlanta, New York, Los Angeles and Jackson Hole, Wyoming, as well as two planes. Quite a lifestyle for a once-homeless playwright raised in poverty in New Orleans. Today, Forbes estimates his net worth at $1 billion, with a clear path to future membership in The Forbes 400.”

Yes, we all know the story of how, at one point in his life, Perry was sleeping in his car. It’s a story that inspires the masses and one that Tyler still enjoys hearing. “I love when people say you come from ‘humble beginnings,’ ” he told Forbes. “[It] means you were poor as hell.” But, it also makes the victories that much more triumphant. “Ownership,” he adds, “changes everything.”

So, if you’re keeping count at this point, like TMZ did, then you’ll know THIS is how the man who created Madea amassed his fortune:

— $300 million in cash and investments

— $280 million for Tyler Perry Studios, which sits on 330 acres in Georgia

— $60 million for his equity stake in BET+, the streaming service that debuted last year. 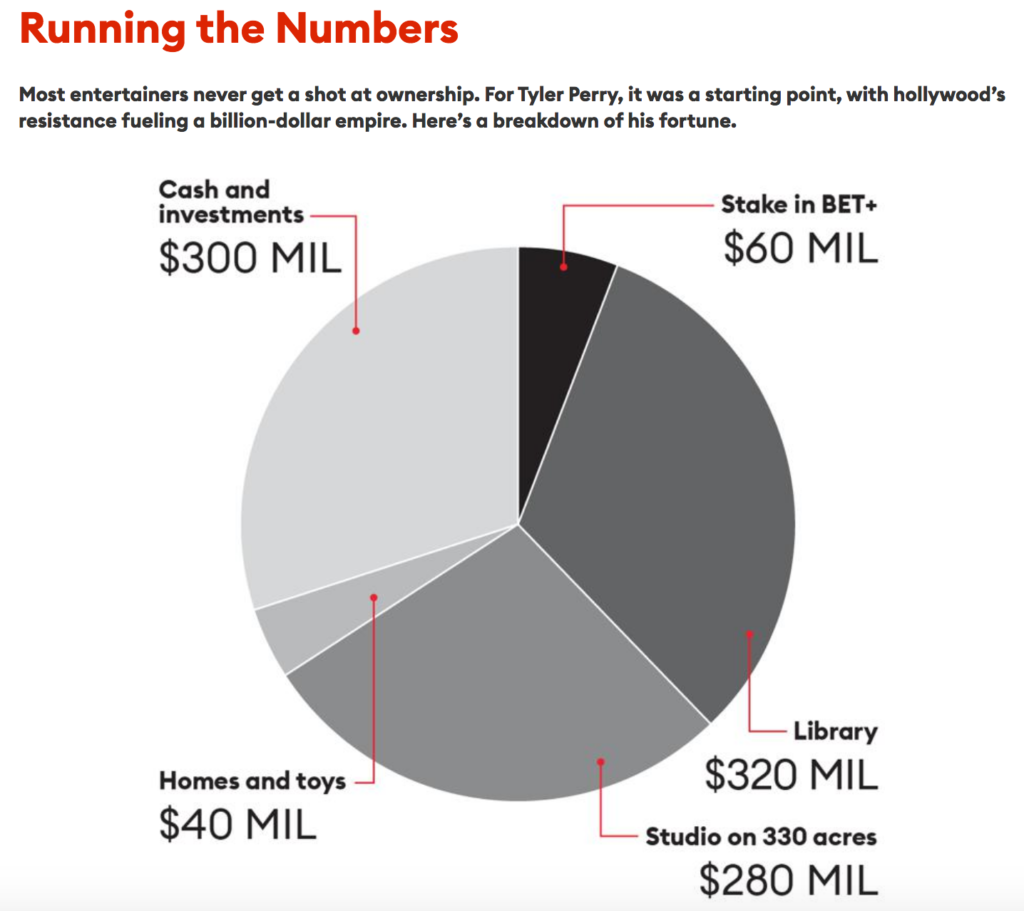