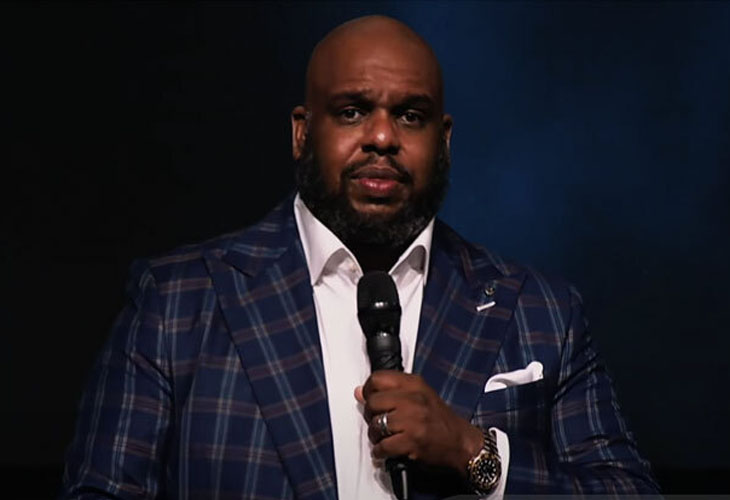 Last year, the Pastor at Relentless Church, was accused of cheating on his wife, Aventer Gray. Now a year later he’s being hit with the same accusations except this time, the alleged side-chick provided receipts.

This all went down last week when the chick, named Mary, put him on blast. The woman shared several videos he sent her where he bashed his wife for not cooking and asked her if she wanted to take a trip to Cabo. She also claimed he was sending her money and would take her on trips. Oh, and called her via Facetime and Marco Polo with his son present.

Attorney’s for Gray initially accused the woman of extortion. On Sunday, Pastor Gray owned up to his extramarital affairs and issued an apology.

The last time he spoke before his church following cheating rumors, his wife Aventer was right by his side. For this public apology, Pastor Gray sat alone on a darkened stage.

“I just want to take a moment to say to you Relentless Church, to the body of Christ, to those who have looked to me as an example of leadership and pastoral oversight, I want to take this moment to tell you I’m sorry,” Pastor John Gray said during his lengthy sermon last Sunday. “I’m sorry for the areas of my life that I left unattended, that I was apathetic about. The areas where I have treated the calling of God, the grace of God and the hand of God casually in my life. For every area of behavior that has dishonored the holiness of God, I want to tell you I’m sorry.”

John and Aventer have been married since 2012 and share two children. The couple invited camera’s into their world for the reality series The Book Of John Gray which aired for three seasons on OWN.

The series followed Gray as he balanced duties pastoring his Greenville, South Carolina church and working as associate pastor at Joel Osteen’s Lakewood Church in Houston, while also dishing advice to his celebrity friends and married couples.

Related Topics:Pastor John Gray
Up Next

Look, we’ll be honest, there’s not much to this story. It’s simply the fact that Chloe Bailey did the “Buss...