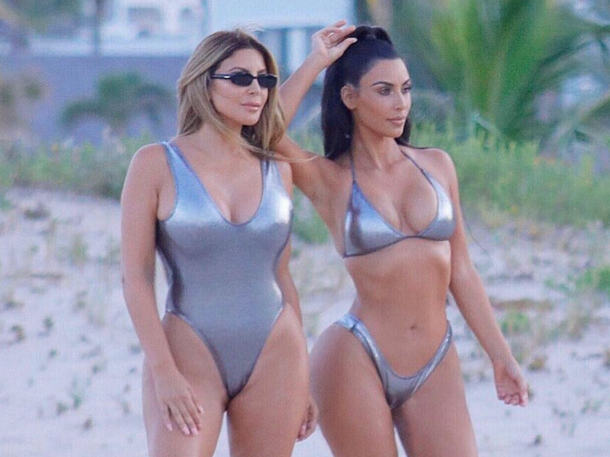 Kim Kardashian may also have some drama brewing with bestie Larsa Pippen.

During her hubby Kanye West’s recent Twitter rant he name dropped the 46-year-old beauty with the inquisitive face emoji. Obviously we are taking Ye’s tweets with a grain of salt given he’s in the middle of a bi-polar episode.

Social media is hell bent on finding out why #KanyeWest named #LarsaPippen in his Twitter rant last night and after some research people are convinced that she allegedly slept with Tristan Thompson. Apparently she’s also the reason behind allegations that #KimKardashian has an affair with #Drake. Others also hint at the fact that Kanye may feel as though she over sexualizes her daughter after he said he wouldn’t have North pose for Playboy. One things for sure Larsa has unfollowed all of the Kardashians and they did the same in vice versa… thoughts? #SwipeLeft

There are however unsubstantiated reports that Larsa may have betrayed Kim and her sisters in the worst way. According to the rumor mill Pippen had and entanglement with Tristan Thompson — and we all know that will get you cut off by the Kardashian clan real quick.

The other rumor circulating is that the family feels she’s way too chatty about their business. Kim actually discussed Larsa’s loose lips on an episode of Keeping Up With The Kardashians after she had done several interviews talking about the Jordyn Woods and Tristan Thompson scandal.

Interestingly Kim nor her sisters are following Larsa on social media and vice versa. Larsa addressed the social media scuttlebutt with a cryptic note alluding to her possible fallout with Kim.

“I woke up this morning blessed and see that everybody is focused on who I am following and who I am not following on social media,” she wrote on her Instagram Story Wednesday. “I am focused on my children, my new fitness brand Larsapippenfitness, and my relationships in real life.”

She added, “Praying that everybody finds peace in their own lives and focus on what brings THEM happiness.”

Larsa, who shares four children with her ex-husband, former NBA star Scottie Pippen, has been a longtime friend to the Kardashian clan. She has frequently attended their parties, made appearances on KUWTK and traveled the world with Kim and Kourtney.

A source close to the situation told E! News that the women simply drifted apart and are prioritizing their respective families.

“They are just in a different place in their lives and are not as close as they used to be, but have no ill feelings at all and still stay in touch,” said the source.

Folks are big mad at Tory Lanez for shooting and wounding Meg The Stallion … but do you blame them?...