Tristan Thompson heard about y’all insinuating he was back with his ex, Jordan Craig, and decided to hop on Twitter to clear a few things up. He also took the opportunity to defend his latest baby mama, Khloe Kardashian, against the brutal “backlash” she’s been receiving. So, yea…

It was just a few days ago the whole internet thought Thompson and Craig were rekindling their love based off of a couple of IG vacation photos. Turns out, everyone had it wrong.

I have spent the last few months training for my upcoming nba season and making sure that I am in the best shape possible. I have not been on vacations at all this summer and the current rumors spreading are 100% false.

Welp, he cleared that up quick. But, while his thumbs were in a typing mood, Tris also cleared up the long-standing rumor, that he cheated on a pregnant Jordan in order to snag a Kardashian.

Also, when I met Khloe I was SINGLE. The negative comments that are constantly being directed towards her are unnecessary. She does not deserve all this backlash for my wrong doings. Both Khloè and Jordan have been nothing but great mothers to my kids.

Still, folks refuse to care about the NBA baller’s 140 characters and have gone on to annihilate his mentions…

However the negative comments directed at you are 100% warranted

But wtf did you keep quiet this long which warranted Khloe Kardashian to suffer all the bashings and humiliations from frustrated women who do not even know which prison their baby fathers are!

Seriously did Kris give him a bag of cash to help Klo out with being dragged by the Jordyn woods thing ??OR did Klo threaten him with paying child support for spending time with Jordy and Prince??

Yeah but Khloe didn’t have to make the relationship so public during Jordan’s pregnancy. She knew what she was doing. If Khloé knew she could get away with it she would have peed on you in public. Khloe is trash 🗑. Checkout the dates on her instagram. Gross pic.twitter.com/r1AbxPAVzd

Nice try Khloe now give the City Boys coach his phone back. We know it’s you 😂 pic.twitter.com/V83GWX0C4x

Are y’all buying what TT is selling?

Related Topics:Tristan Thompson
Up Next 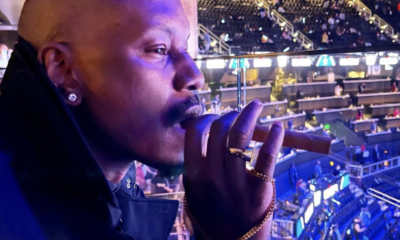 Looks like Tyrese has found himself a new “Sweet Lady.” Just a couple months after announcing that he and wife...

Girl chat with Keri Hilson?! Yessssss! That’s right, the ladies of HipHollywood, Jasmine Simpkins and Vanessa Barnett, sat down with...