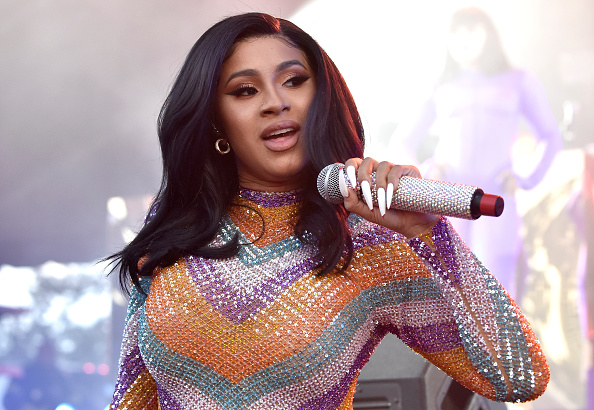 Cardi B. has a good reason why she always raps about her vajayjay. Per the “Press” rapper it’s simple, she’s her best friend. No seriously.

On Friday Cardi responded to comments Jermaine Dupri made about female MC’s calling them “stripper’s rapping.”

#PressPlay: #CardiB responds to #JermaineDupri saying he doesn’t have a favorite female rapper because all they do is talk about sex #SwipeLeft Thoughts?

Apparently the So So Def founder takes issue with female rappers who only seem to rap about their feminine parts. “I feel they’re all rapping about the same thing. I don’t think they’re showing us who’s the best rapper,” Dupri told PEOPLE of today’s female rappers. For me, it’s like strippers rapping and as far as rap goes I’m not getting who’s the best.”

Cardi, of course, was quick to clap back at Dupri.

“Okay guys I have seen a lot of people saying nowadays female rappers only talk about their p— and now that Jermaine Dupri brought it up I’m going to say something.”

“First of all, I rap about my p— because she’s my best friend and second of all it’s because it seems like that’s what people want to hear,” Cardi continued.

She went on to explain that whenever she did put out a song that wasn’t sexual, her fans weren’t receptive to it.

“When I did ‘Be Careful‘ people was talking mad s— in the beginning like ‘What the f— is this?’ ‘This is not what I was expecting,’” Cardi said of her song, which she raps about getting her heart broken.

Cardi followed up with a second video, in which she listed a number of female rappers, including Rapsody, Tierra Whack, Oranicuhh and Kamaiyah, who don’t talk about their “vajayjays.” She explained she feels they don’t get the recognition they deserve.

“I feel we need to put these girls in more magazines and blogs. Radio DJs play these girls,” Cardi said.

Rapsody responded with her own video, thanking Cardi for the support.

It takes a village. Reals ones always rise. Stay your authentic self always, @iamcardib !! ” she captioned on Instagram. “People ask me about the state of Hip Hop and women in it all the time….my answer is always it’s BEAUTIFUL!”

It takes a village. Reals ones always rise. Stay your authentic self always, @iamcardib !! People ask me about the state of Hip Hop and women in it all the time….my answer is always it’s BEAUTIFUL! There are sooooo many dope ladies rockin! To the sisterhood….keep doing YOU….there’s room for us all! And space to show love. It doesn’t dim your light to see the light in others. To our folk….know our power….the culture moves thru us. Mad love always!! – Rap 🔻

Interestingly, 2019 has been a massive year for women in rap. From new breakout stars like Megan Thee Stallion, The City Girls and Saweetie to the continued chart domination of Cardi B and Nicki Minaj. Per Dupri they all have artists like Da Brat to thank.

“Brat was the first female artist to go platinum, so we together broke the mold… and since then female rappers have been able to sustain and sell a lot of records, more records than guys, but before Brat that wasn’t happening,” he said.

Dupri seems to forget (in his tone def diatribe) that male MC’s (like himself) have been rapping about the same things (Money, Cars and Sex) for several decades and female rappers got fed up with the misogyny and sexism. So he really only has himself to criticize.