Basketball Wives LA star Gloria Govan is vehemently denying rumors that she’s been having an affair with Tamar Braxton’s husband, Vincent Herbert. On Monday, several websites published reports alleging that Govan had become smitten with Herbert after reaching out to him to further her career.

HipHollywood went directly to Govan for a response to the rumors, and she is adamant she has no connection to either Tamar or Vincent. “I never met Tamar. I didn’t even know who her husband was until someone told me about the story. I have never in my life met him. If I saw him I wouldn’t even recognize him,” she told us exclusively, adding, “I don’t even know what the man does.”

As for the rumor’s origin, Gloria believes someone with a personal grudge is looking to create drama. “People know that Matt [Barnes] and I are separated, so I think people are just going to throw whatever they can’t out to the blogs. Now that Matt and I aren’t together, they can say she’s messing with this person or messing with that person.”

As for who she is messing with if not Vincent or Matt, the reality TV beauty adds, “I’ve learned not to put my business out there, that’s why you won’t see me posting stuff with a guy on Instagram.”

Last month, Govan and her estranged husband Matt Barnes announced that they were separating after marrying back in August 2013. Govan recently told TMZ that a reconciliation with L.A. Clippers star is NOT out of the question, but we guess time will tell.

Solange Knowles Thanks Benaydryl For Saving Her Wedding Day 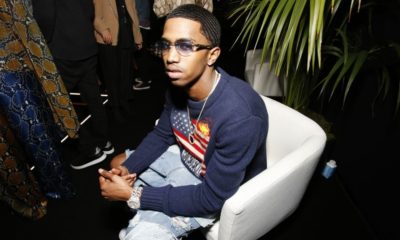 Sean Diddy Combs’ 22-year-old son Christian “King” Combs is thankful to be alive. On Tuesday Combs was involved in a...